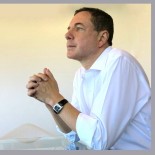 Roberto is CEO and Creative Director for H.Stern, Brazilian Jeweler. In this blog he gives an insight into his vision and talks about the collaborations he has with creative people from all over the world.

Collaboration with Oscar Niemeyer, the legend

“Oscar Niemeyer is without doubt Brazil’s most famous architect famous for his own specific style and strong mind. We were lucky enough to work with him on a major collection.

Oscar is one of the world’s most influential architects. He’s also known for his phrase: ‘Architecture is of no interest. What is of interest is life’. He has his own specific style, reflecting the natural curves you find in nature with spaces full of harmony, grace and elegance. This perfectly dovetails my own realization that you never find truly straight lines in nature. That’s why I love asymmetry and irregular contours. They’re more human and natural. 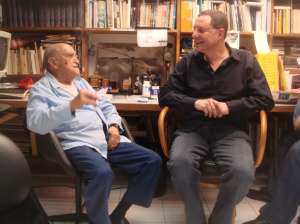 When I approached Oscar, he had already passed 100 years of age. He’s truly extraordinary – both personally and professionally – and I knew I was going to have to pull off something remarkable to honor his genius. It was especially daunting because he’d never approved a collection in his name before. To make things ‘worse’, he told me he’d approve anything that was beautiful!

I realized quite quickly though that it perhaps wasn’t as hard as it seemed. We really do have the same perspective. Simplicity. Natural. Flow. I like to think we pulled it off. Whatever the case, we produced the first collection Oscar had ever approved and married the two vastly different disciplines of architecture and jewelry. When you look at them in detail you realize that, although they are of course entirely different to the concrete buildings and cities he built, the graceful and fluid bijous still radiate his personality, and mine!

In the end we produced a collection consisting of six different lines using gold and diamonds and named them after some of his works and famous projects. I am still hugely proud of each piece.”

Roberto and Carlinhos Brown – “anything but mainstream”

”Strolling through São Paulo with the Campana Brothers”

Tim Burton and Alice in Wonderland

The movement of Grupo Corpo

One comment on “Collaboration with Oscar Niemeyer, the legend”